When delivery space is tight at the
grain elevators, producers who can
deliver grain immediately, no matter
what the weather is doing, have a
distinct advantage over those who can’t.
That’s part of why grain, oilseed and
cash crop producers across Canada are
growing their storage capacity in
centralized, all-weather locations.
Canadian grain farmers have always
liked to store their production on
the farm. Since grain prices are
traditionally at the lowest point of their
commodity cycle during harvest, being
able to deliver later in the year often
means better returns.
At one time, producers liked to have
grain storage on every significant parcel
of land, says Lyle Muyres, vicepresident
of marketing at Corr Grain
Systems in Regina. Today, 20,000-acre
farms aren’t uncommon on prairie
farms. Farmers want to store all their
grain in one location so they can more
easily manage it. Many use grain bags
to temporarily store grain in the field
during the harvest rush and then move
it to their central storage location,
where it’s simpler to keep a close eye
on its condition.
“A lot of the reasons farmers are
improving grain storage and handling
systems relate to logistical and human
resource efficiency,” says Terry Betker
with Backswath Management in
Winnipeg. “Some farmers are running
three or four combines and harvesting
four or five thousand bushels an hour, so
using big bins saves them a lot of time.”

Betker says there are good economic
reasons for producers to match their
grain storage to the size of their
combines, grain cart and trucks.
Centralizing grain storage improves the
logistics of trucks coming and going. It
simplifies the operation, because you
don’t need to run to different yard sites
when it’s time to deliver.
Most producers installing new grain
storage systems lease them. That’s
because leasing a bin system can have
a large tax advantage over buying one,
says Tere Stykalo, MNP’s southern
Manitoba ag leader based in
Dauphin, Man.
“When a producer purchases a bin, they
can only claim a capital cost allowance
at a rate of 10 per cent per year on a
declining basis. In the first year it’s only
half that rate, or five per cent.” Stykalo
says. “So, on a simple $50,000 dollar bin
purchase they’re only able to depreciate
$2,500 the first year and $5,000 a year
after that. If they took a five-year lease
on a $50,000 bin, though, they could
claim a $10,000 a year lease deduction.”
“These are very simple figures that I’m
using as an example only,” he explains.
“There is a small buyout at the end, but
there sometimes are major tax
advantages to leasing versus buying.”

Have a master plan

According to Muyres, the first thing to
consider is where you’re going to put
your new bins. Keep in mind things like
elevation, proper drainage and, of
course, future expansion. Just because
an area might work with the trucks and
handling equipment you’re using today
doesn’t mean it will work with the bigger
equipment you might use in the future.
Everyone has put grain storage in the
wrong spot or in too low an area at some
point, he says. “Get it up in an area
where there isn’t water pooling, not only
where you put your bins but also where
your equipment is going to be during
haul-out.”
Selecting the right sized bin can be
tricky too, because it will vary from one
operation to the next. He believes size
needs to be determined by the variety of
crops you are growing today and leave
some flexibility for the future. Those
who grow ten or twelve different crops
choose to have more, smaller-capacity
bins, while those who grow large
volumes of just two or three crops tend
to build big ones.
“You want to be able to set up your auger
or conveyor into a bin and not have to
move it for two or three days,” he says.
“So whether it’s 20-, 30- or even
50-thousand bushel bins, pick a size that
minimizes moving equipment at
harvest. Then on the draw side it will
allow either you or custom haulers to
draw grain out very efficiently.”

As bins on farms get bigger, though,

producers are increasing the risk of

catastrophic financial loss from spoilage.
That’s why nearly all producers install
monitoring systems, along with aeration
and other systems, to manage the
condition of their grain.
“It’s important you buy the right
aeration and monitoring technology for
your new bins,” Muyres cautions. “Don’t
pick a particular system just because
your neighbour has it. Pick the one that
will work best with the size of your
system to condition your grain.”
The technology is evolving quickly. With
the newest systems, you can monitor
your grain while you are away from the
site. If the temperature in a bin starts to
climb, the system will send an alarm to
your smartphone and let you control the
fans from your mobile device – even if
you are out of the country.

“If you’re thinking of building a new
grain handling facility, I recommend
you work with a grain management
specialist,” Muyres says. “You can do it
on your own, but a specialist can help
walk you through the numerous options
out there.
“It’s also important to make sure that
whoever is installing your bins has the
expertise you need,” he adds. “Lots of
great product gets set up by subpar
installers. It’s no different than if you
build a house: the quality of the person
who builds it is probably as important as
the quality of the product you buy.”
When you have the right storage
capacity at your farm, you stand a much
better chance of being the guy
at the terminal who can make just-intime
grain deliveries for the best
return possible. 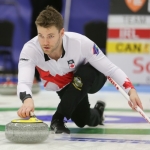 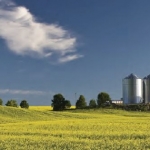